Designer of the Week: Edith Head

Which single female has won the most Academy Awards? Was one of 's leading costume designers in the 20th century? Was known for her dark glasses? Was only 5' 1 1/2"?

If you said Edith Head, then you are right. 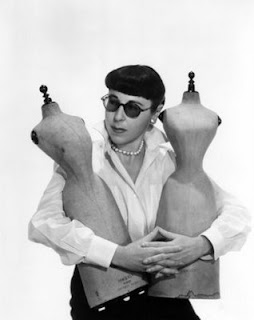 Born Edith Claire Posener in 1897 she was the daughter of Max Posener and Anna Levy. Her father was a naturalized American citizen from and her mother was born in to an Austrian father and Bavarian mother. It is unknown whether Max and Anna where ever married but in1905 Anna married mining engineer Frank Spare. They passed Edith off as their mutual child. The family moved frequently as Spare's jobs moved. Frank was Catholic and therefore Edith became one as well. 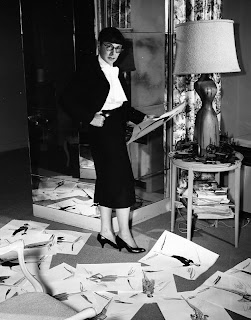 In 1919 Edith received a bachelor of arts degree in letters and sciences with honors in French from the  of , and in1920 she received a master of arts degree in romance languages from . After working for a year substitute teaching French at the Bishop's School in La Jolla she took a position teaching French for the for Girls. Wanting a higher salary she also told the school that she could teach art, even though she had only briefly studied it in high school. 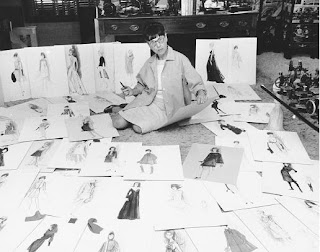 She decided to take evening art classes at the to improve her drawing skills. On July 25, 1923 she married Charles Head the brother of one of her classmates. This marriage ended in divorce in 1936 after several years of separation. Although she continued to be known as Edith Head until her death. 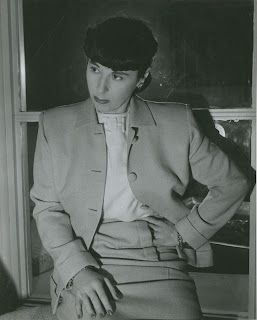 In 1924, without any costuming experience, Head was hired as a costume sketch artist at Paramount Pictures in the costume department. She later said that she had borrowed another student's sketches for the job interview. 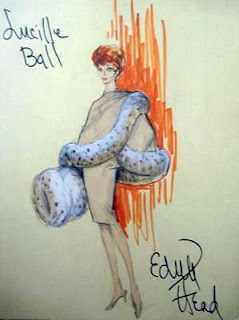 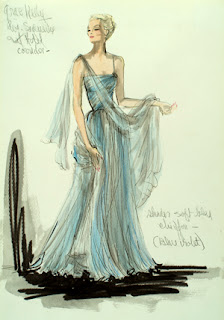 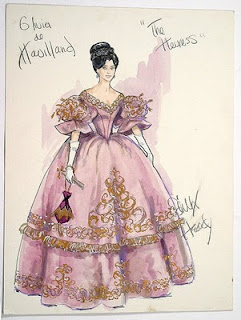 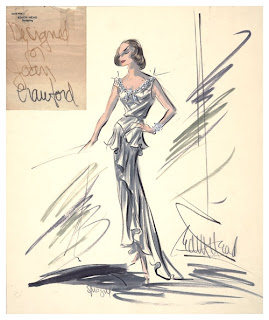 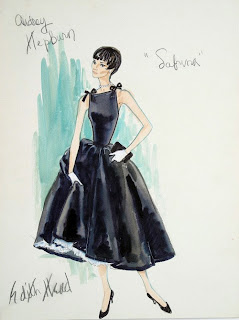 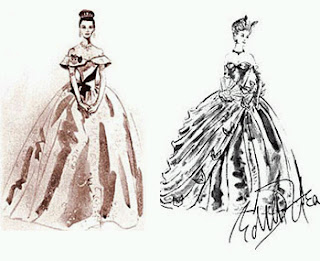 She began designing for silent film starting with The Wanderer in 1925 and by the 1930s she had astablished herself as one of 's leading costume designers. She worked at for 43 years designing  movies. On March 27, 1967 she went over to Universal Pictures where she remained until her death in 1981 after designing her last movie Dead Men Don't Wear Plaid which was released after her death.

On September 8, 1940 Edith married again to set designer Wiard Ihnen. This marriage lasted until his death in 1979.

Throughout her long career she worked on over 500 movies. Some of the most well known being Rear Window, The Sting, Vertigo, Sunset Boulevard, and Roman Holiday.  She was nominated for 35 Oscars, receiving 8 of them. 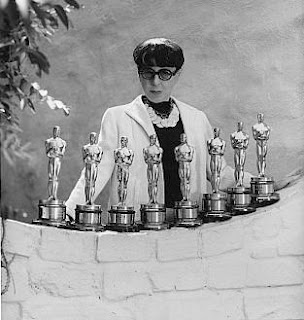 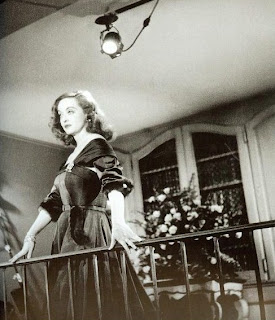 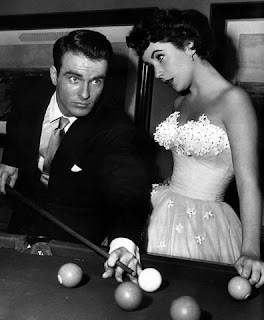 Head was known for her low-key working style and usually would consult with the female stars with whom she worked. This meant she soon became a favorite for many of the leading female stars of the 40s and 50s. She was often "lent out" to other studios on the request of female stars. 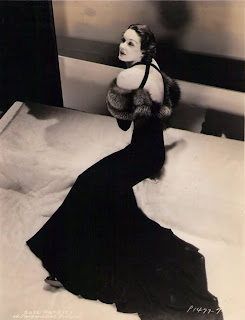 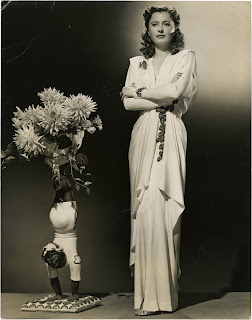 Among the actresses Edith Head designed for were: 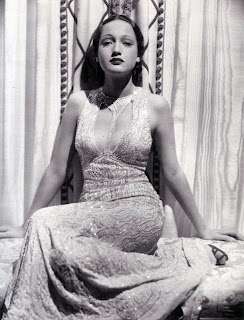 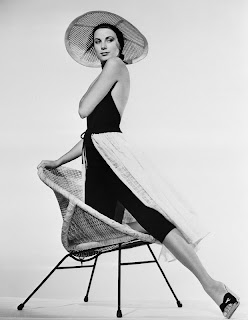 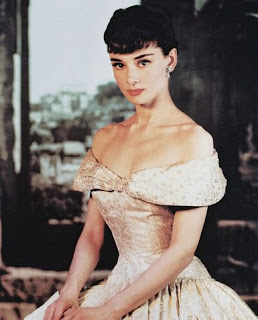 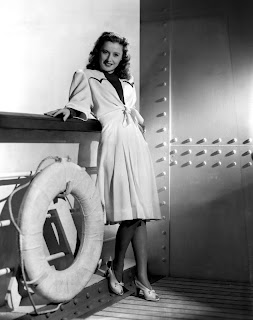 Despite being a favorite among many stars Head still had those who did not like to work with her. Most notably Claudette Colbert. Head also had the reputation for taking credit for others work. This was rather easy in the era of studio-dominated film production when a department head commonly took credit for the designs from his or her department. 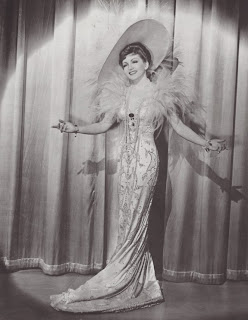 Edith Head died  from myelofibrosis on October 24, 1981, four days before her 84th birthday.

A  37¢ commemorative postage stamp was issued in 2003, celebrating American Filmmaking: Behind the Scenes with a picture of Head working on a dress. 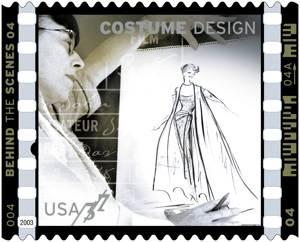 Her trademark sunglasses were really blue lensed glasses. Looking through blue glass was a common trick of costumers in the Black and White ere to get a sense of how the color would photograph. Edith had the glasses made special for her. 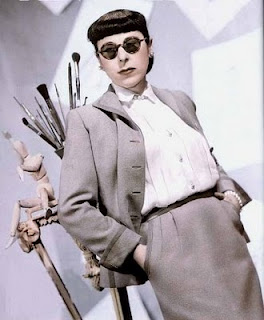 Edith Head is interred at Forest Lawn, , in the Cathedral Slope section, plot #1675.
Many viewers of the 2004 film The Incredibles felt that the personality and mannerisms of the superhero costume designer Edna Mode was a colorful caricature of Edith Head. Edna Mode's sense of style, her assertive no-nonsense character and iconic round glasses were more then likely a homage to Head. However the film's director Brad Bird has neither confirmed or denied this. 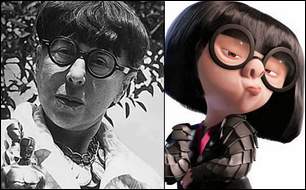 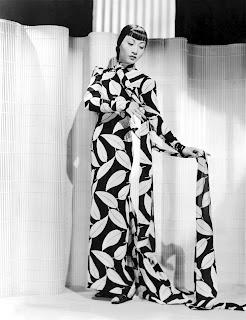 Anna May Wong in Dangerous to Know (1938)
"What a costume designer does is a cross between magic and camouflage. We create the illusion of changing the actors into what they are not. We ask the public to believe that every time they see a performer on the screen he's become a different person." 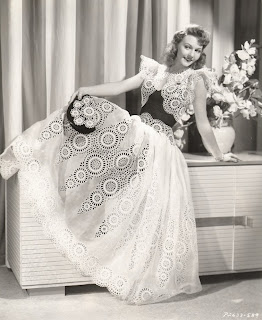 "You can lead a horse to water and you can even make it drink, but you can't make actresses wear what they don't want to wear." 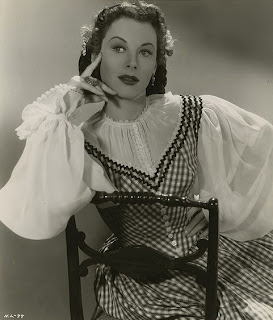 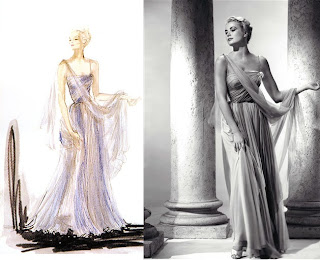 Sketch to dress with Grace Kelly.

There you have it, a brief history of Edith Head the Hollywood designer.

So glad you enjoyed it! I loved writing it!

I recently found out my Aunt was one of Edith Head's top seamstresses at the studios. Funny story how they met. My Aunt was at the studio applying for work and she accidently bumped into a woman when turning a corner at the lot. The woman looked my Aunt up and down and asked ... who dressed you? My Aunt replied, I did. Edith Head took her to a large room with many women sitting at sewing machines, told her to sew her what was on the table. My Aunt did and she was hired. My Aunt worked for her until she (my Aunt) retired.